Inspired by a terrifying trip through Oslo's iconic Vigelands park. I found the imagery in there to be so nightmarish, and the atmosphere so evil, that I refused to walk back through it! The Entrance Bridge is flanked by two columns on which woman fight with reptilians; the man holding two babies seems to be stealing them, his expression gruesome. I found the layout of the park, with its stylised intersecting triangles, cuntish bowls and phallic centyral obilisk, a disturbing mockery of paganism. I correclty guessed that it was designed in 1932, the year of the rise of Adolph Hitler. Not for fluffies!
Posted by Dot23 at 02:42 0 comments

Making a Ring of Branches

This image relates to the Which  Witch  is Which post, and was taken by a visitor to the Rollright Stones.

First things is that I managed to set fire to both my feet on saturday, and have to go for (possible) plastic surgery tomorrow.

on of the saddest things was that it burnt a poster I'd been allowed to take from a gallery in Oslo. It was really inspirational, colourful & had loads of great graphics, band logos and so on.  I'd planned to give it to a friend who admired it, after I scanned it, but hadn't had a chance to.  I hope to either scan and reproduce it with a team of graphic design helpers and/or ask for a new copy from the people who made it.  I'm sure they'd send me another one if they knew how I stamped on it to put it out and gave myself 3rd degree burns!

Third, & as a result of going to that, I've been asked to contribute to the Hotel Babylon project run by Madregal W.  It'll take place on 20th-22nd June, and she's asked for logistical support, assistance with the set up / take down & I hope, a chance to show off some of the anaglyphic 3d ideas that i'll be posting up on tumblr soon.  I hope to produce a series of social revolutionary 3d woodblock / linocut prints  which I also want to submit to the

4, Bite 2 exhibition - deadline's coming up so gotta remember to file my application!

5 recently supported my amazing friend Martine Votvik's performance art piece "Gynometry" which she did the first experiment of at the end of second year show at Kingston.  Basically I personned the stations in hitech HQ - and checked the live streaming aspect of her work functioned and invited guests to view the act as it unfolded.  Armpit hair weighs about .003 grams apparently :)

6.  I'm working on a gig with the Goggenheim, an Oxford based Operatic SpacePunk band - they're an amazing group, with a fantastic, unique lead singer called Grace Exley who used to be a Banbury arts student! They're playing on the 31st May in the Bullingdon Arms, Cowley Road, and I'd like to invite everyone who's reading this to come down!

7. Saving myself & then the Planet! 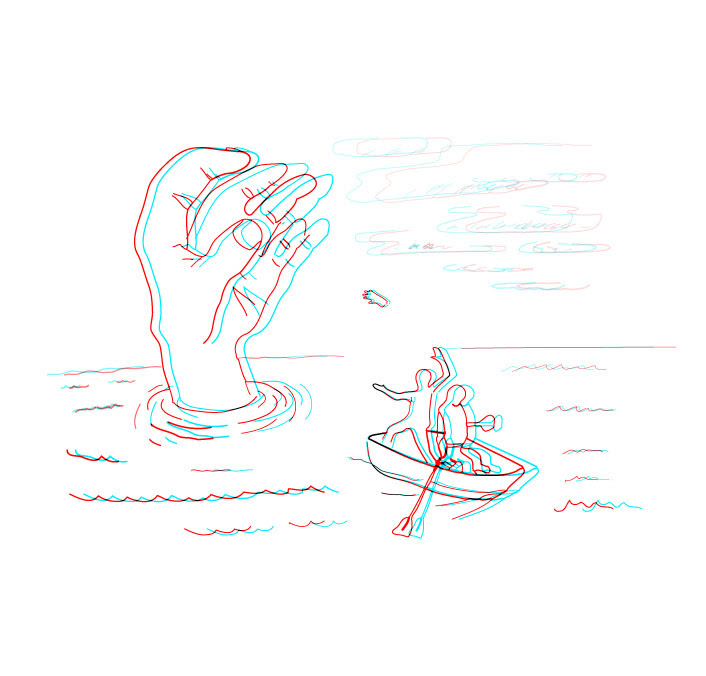 based on a norwegian folk tale of the North coast, this image relies on a process called anaglyphic  resonance, that allows us to see different images from each eye through coloured filters to creat the illusion of depth. 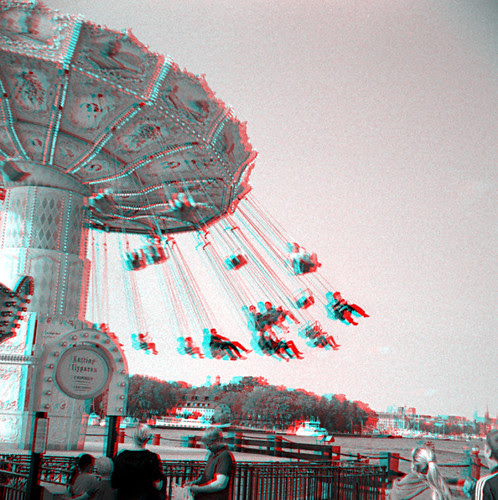 Been researching my latest idea: 3d prints
Posted by Dot23 at 18:27 2 comments

My installation / Art piece is also entitled Work in Progress, and I'm asking gallery visitors to change the organisation of my artwork, add to artwork, or complete their own unfinished pieces whilst here.

Which Witch is Which?

Some friends and I started to make some additions to David Gosling's work in progress sculpture of a Witch by the King's Stone at the Rollright Stones. See what happens when she sees that I'm recording her and ask her whether I'm allowed to add to existing artwork, in a positive way.

During my filming, the woman grabs my phone out of my hand and tries to interfere with it. I steal her biscuits in retaliation - & then the fireworks begin!
Posted by Dot23 at 11:26 5 comments

I'll be making & completing some artwork over the duration of the show's run. I'm going to inivite participation from gallery visitors. This is to highlight the evolving nature of my relationship with making, how I see it as a collaborative process, involving many people. I want people to see the decision making, the processes, the anguish. Art is messy, making is messy, we shouldn't have to tart it up, cut it to size, make it ready for sale. Art & craft is about the moments of sauté when you make mistakes, the surprises, the transformation. I want people to join in this healing & expression.
Posted by Dot23 at 23:37 0 comments

I have been rejected by an exhibition which starts today called "REJECTED" at the A-side B-side Gallery.

I applied to the Forge 2 competition last year


" I have been rejected by other competitions, institutions, girlfriends and even my family - however it's all too painful to remember, in fact I seem to have a hollow, black forest of nothingness where any memories about other rejections lie.  Don't make me think about it any more. Please!!!"
;)

So they wrote back with this:

So I wrote back:


Oh come on, you can't be serious; your sending me a rejection letter about an exhibition on the theme of rejection letters with a policy of no rejections. Please give me a break, I'm a new artist, struggling with self doubt, and there's gotta be a corner you can put me in.  PLeASe!!!!

I looked up the gallery and decided to ring them after I'd not hear anything more.  After I called and 'explained' that it was ABSURD & RIDICULOUS to reject a submission to an exhibition about rejected artwork, and that they should at least print out a copy of my rejection letter from them and paste it to the front door of the  gallery,  Catherine said she would put up my submission on their facebook timeline - this hasn't happened.

Thankyou for calling earlier!  That was a lively debate!

{She actually said I was rude and aggresive, so nice to see that she's utterly sucking up to me now} 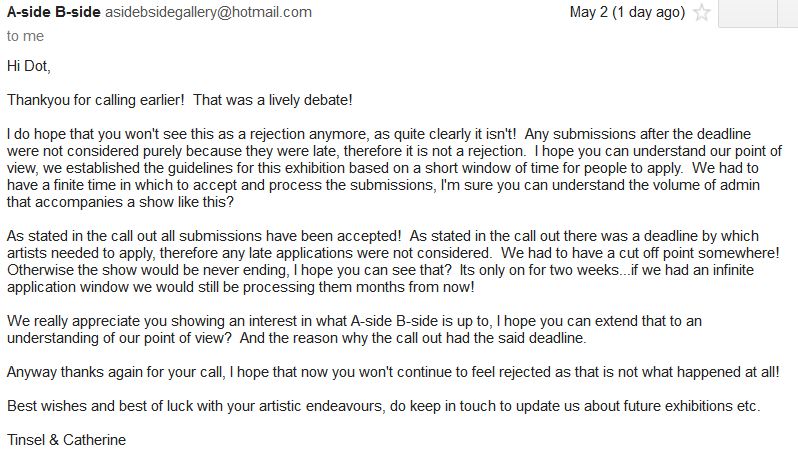 I do hope that you won't see this as a rejection anymore, as quite clearly it isn't!  Any submissions after the deadline were not considered purely because they were late, therefore it is not a rejection.

QUITE CLEARLY IT ISN'T?? If I submitted something for a show, and they refuse to put it up, for whatever reason, I'd say that was REJECTION!! Let's see what the dictionary has to say about rejection:

From Wikipedia, the free encyclopedia
The word "rejection" was first used in 1415.[1] The original meaning was "to throw" or "to throw back". 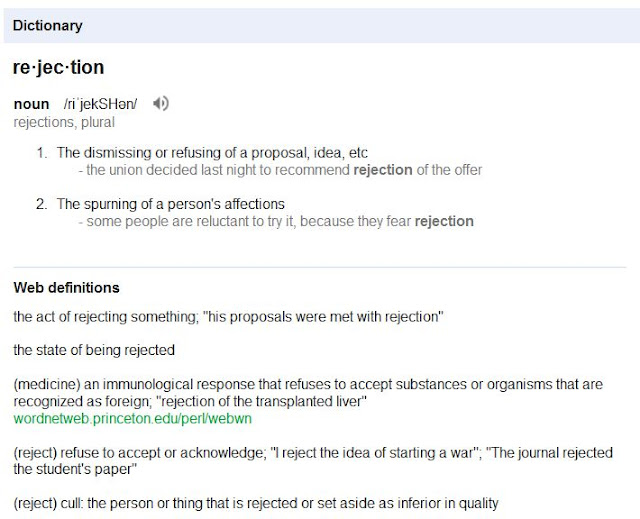 Is it just me or do the curators of this exhibition have ABSOLUTELY NO SENSE OF IRONY?

I actually am really pissed off about this, I've spent over an hour composing this post, and spoke to Jane Prosser at my college, who suggested I do make an issue out of it, although she can see that from a Gallery Owner's point of view one has to stick to deadlines, but COME ON!!  I mean less than 4 hours after the deadline (in terms of being in the office)

Catherine also told me that there were only 3 submissions after the deadline, and 40 before, so the administrative complexity of processing 3 late entries would have to be minimal. Say, 30 minutes to print out their emails and find a small space they could go?

if you really feel comfortable  with these people's complete lack of a sense of humour, humility or humanity, feel free to check out the details for their exhibition below, or even send them a humerous comment on their twitter account - I'm sure they'll appreciate the attention :)

Seems there's a resurgence in all things fairy tale; could it be because we're living in times where the power of fairy tales to programme us with obsequious behaviour & aspirational yearnings towards upper class archetypes is being used by the establishment to cling desperately to privilege?  Or is it the opposite?  A warning from the lower classes, that these old-fashioned mores are on the way out, so enjoy looking back whilst you've still got a neck to turn & look back with!?

if you've got some more examples of movies, programmes, music etc using fairy tales, please post them here!
Posted by Dot23 at 01:22 0 comments