Another goal achieved - visited the Ashmolean to see Lorrain's pastoral paintings - stumbled in there at ten to six, got them to unlock the gallery & ler me in even tho i had no ticket! SO I only had a chance to look round real quick and get an impression - they were all large imposing pictures, clearly designed to impress in stately homes, and all used identical palettes of pastel shades, deep greens and light cyans. although they didn't have a huge emotional impact, the scenes of mythical characters swamped by a placed eternal nature, with decaying classical architecture, evoked a sense of nostalgia and distance; it felt like being in the wood between the worlds in Lewis' Narnia books.

I begged the attendant to let me do a quick sketch of one of the paintings; i copied the basic layout of the painting in about 60 seconds! I noted that human anatomy wasn't the artists strong point, and the attendent said,'He commented once that he was paid for the landscapes; the people were free!' presumably meaning he didn't spend much time on them :)
Posted by Dot23 at 16:01 0 comments 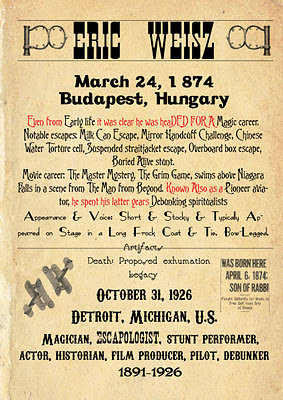 !() New Initial Design for Biographical poster - I'm hoping to make it look a bit more like the one below by changing some of the typefaces & text layout. NB the above design is text copied verbatim from the wikipedia page on houdini except where in red

I've plumped for Houdini as my historical personage for a few reasons:

I've come up with a few ideas so far as to how to represent him - so far the idea of him being an escape artist and escaping the frame / the artwork in which he is situated are most prominent.

I thought it would be interesting to reproduce an original poster advertising one of his 'challenges' but excising his name from the artwork - also recreating one or more of the equipment his feats such as the underwater tank escape (i.e. a fishtank, a cage with chains) with Houdini absent.

I'm swatting up by reading Houdini on Magic edited by Walter Gibson & Morris Young, and

intend to re-watch the wonderful "the Illusionist" movie based on the battle between 2 turn of the century performers and their increasing risk taking in order to capture the perfect stage illusion.
Posted by Dot23 at 08:33 3 comments

Oh boy, where to start? It's been a busy, fractured start to the term, and I feel really bogged down with the workload. My long term problems of time-management & organisation have really started to show with taking on this new course, and I'm begining to realise I really need help with these aspects.

on the plus side, I've been creating a lot more output than usual, and trying to take advantage of every opportunity to visit galleries or get involved in arty things generally.

Below you can see some film Martine Votvik & I shot on a trip into the countryside which I'm co-opting for the "Three Little Words" project - one of my words was 'Rural' so that fits in nicely.

Also I spent a hectic weekend in London, visiting the Tate Modern to see Tacita Dean's FILM installation in the turbine hall - more in another post - as well as an exhibition in Mile End from one of Martine's tutors; we also visited the Ratstar Squat Social centre and the Anarchists Bookfair, as well as the ongoing OLSX (Occupy London Stock Exchange) campaign which has set up camp on the steps of St Paul's cathedral.

I spent the weekend experimenting with watercolours, have realised that I have a lot to learn about using a brush!
Posted by Dot23 at 08:16 0 comments

On a lighter note, here are some chickens, hens & chicks we met at a small farm - they're not for eating, they're pets!
Posted by Dot23 at 07:27 0 comments

This is us driving around at night, near to White Horse Hill, Uffington. The spookiness of the small roads is highlighted by the flashes of light (flicking on the full beam). Being brought up in the city, I still find roads at night unsettling, never sure what's gonna jump out at you round the next corner! Originally filmed by Martine Votvik as part of a video projection project for a live rock music performance, the footage also fits in with the project I'm doing - synchronicity!
Posted by Dot23 at 07:23 0 comments

For the Rural section of my "Three Little Words" project, Martine Votvik & I filmed a selection of locations in the countryside - this decomposing barn was spotted by the roadside and we went to investigate. It felt eerie, and I kept hearing voices behind the walls, which belonged to no one!
Posted by Dot23 at 07:18 0 comments

So, I've taken the plunge and come into OCVC Banbury to make a start at a FdA in Creative Arts & Practical Design. The purpose of this blog is to keep track of my progress on the course and let my tutors know what I'm up to.

It's been a while since I've kept a blog, which is a shame 'cos so much has been going on in my life, and I guess it would have been good to have a record of all the changes that have been going on over the last few years. On the other hand, some events might better be drawn a veil over.

In terms of art & design, I've had 2 projects on the go recently; the first, to make logos for OX4 radio station, was a dead end (it seems) as the head of programming emailed to say they were going to stick with their initial design. This is a great shame because I genuinely think a couple of the ideas where really eye-catching (plus their logo is reallly confusing on the eye!). Secondly, a commission to design a pop up poster for Bubblefeet, a company which provides fish foot spas - basically, you put your feet in fish tanks and the fish, known as 'doctor fish' (or, more properly, garra rufa fish) eat the dead skin off your feet. Sounds kinda gross, but it's actually really relaxing and healthy. I've almost finished the latter, but the company have yet to send me some photography I need to complete the designs.
Posted by Dot23 at 01:51 0 comments