Here's the updated picture I just did from the scan Piotr sent me- part of me likes the messed up ones even better :) - what do you think?

Was at Freud's the other night and did a cool little sketch bar guy / DJ Peter, photoed it, gave it to the chap (who played some sweet minimalist techno and spanish trance)

The pics i took on my nokia where blurred & it's been frustrating trying to get the lines sharp.


I wanted a pure image to work from to get rid of the "noise", so tried to sharpen the image and remove speckles  or noise from the original photo.  I didn't really get what I wanted (so far),

However, the attempts have yielded some interesting messed up results, which could prove inspirational :)

Seem to be having an issue porting over one image, so I'll hupdate this hone later :) 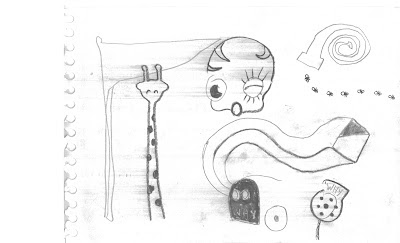 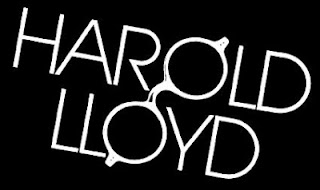 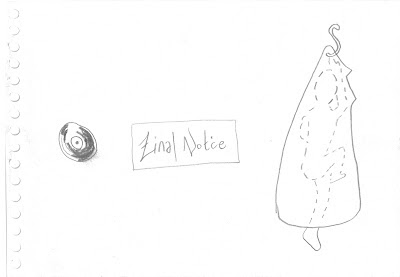 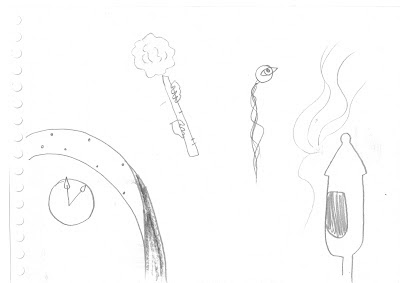 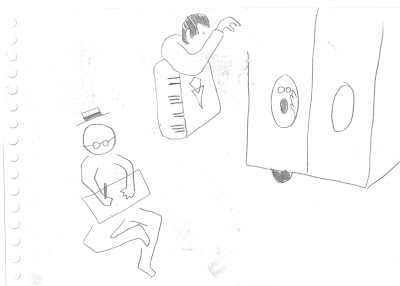 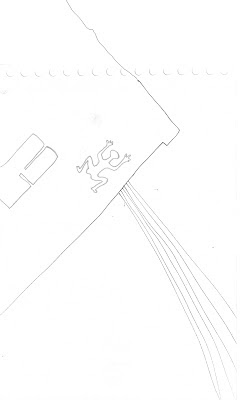 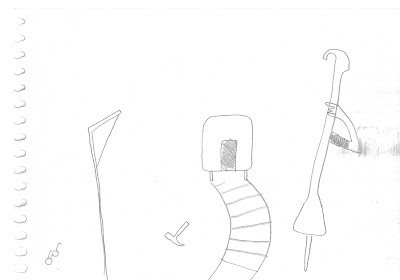 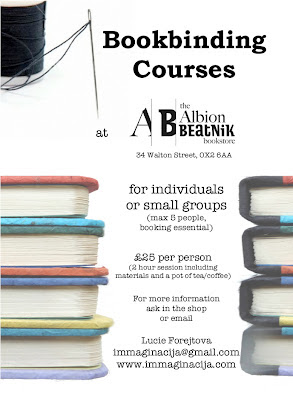 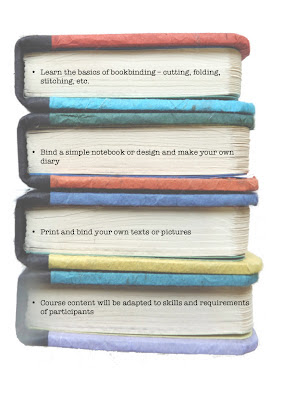 Imaginacija Paper Art from Lucie Forejtova at the Albion Beatnik Bookshop
Posted by Dot23 at 17:55 0 comments

wrote to Project Room & art room @ crisis asking for some work space, as well as asking a family friend who has a studio - I'm really feeling like I need some place seperate from where I sleep & eat to create - there's too many distractions here!
Posted by Dot23 at 17:21 0 comments 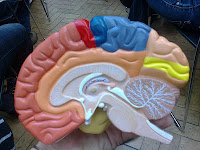 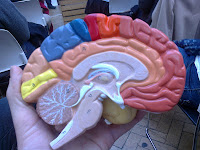 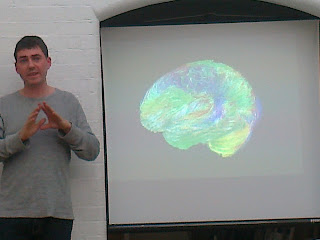 Some interesting presentations, especially the one about mind reading machines & gaming (Ever get that feeling you have HyperBalls?) and collective science projects using grids of user machines.   some links to those ideas on these phone images: 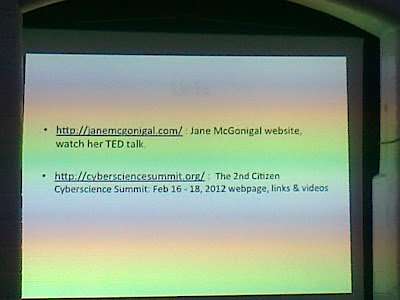 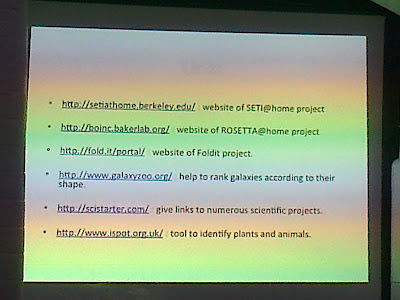 Might as well put the link to TECHNOSPHERE here too - a great late 90s virtual evolution environment where you could build your own monsters and watch them devour each other! (or mate and have babies - ahhh)
Posted by Dot23 at 16:49 0 comments

Well, it's been about 3 hours work, but finally I have managed to get my twitter feeds on fb, and my posts here on blogger cross-posted onto both twitter and facebook thanks to an app called networkedblogs which spits out little chunks of what appears here onto fb and twitland at the same time.  All of this just to save me clicking the share button on each post!

Actually, this should bring in some new followers and viewers; I've been putting a lot of effort into keeping my Ellipsis blog up to date and interesting (hopefully) and I think, like a good meal, it's better shared.  Also I want to encourage comments (woah no comets!) and feedback on my art work and so on, because as I consider entering the world of commercial design/craft or perhaps trying to use art for social/political reasons, I'll need to draw people in to talk about ideas and get customers and supporters.

So, hope this works, be great to get some dynamics going in these pages, and hey, it's been a good learning experience that I hope I can share with others :)
Posted by Dot23 at 20:47 0 comments

Just wanted to way what an awesome time I had today experimenting with Liquid Light - it's not quite as science fiction as it sounds, but it does allow one to expose negatives onto any surface, and paint specific areas that one wants to expose photographs onto.  bah i can't explain it, here's a youtube video: Experimental Photography Processing : Experimental Photography: Liquid Light


I was desperately hoping these might be used in the promotional material for our upcoming Grimm's Fairy Tales related end of year show in May; however, the harder one grips on to something the more it slips through the fingers. I understand the rest of my group (hi guys if you're reading this!) wanted something to represent all of them,  but I still think this looks cooler than the image our tutor suggested - it also represents loads of things to do with fairy stories!

The icons were all suggestions that my classmates gave me at the beginning of the project -  I like the concept of democratic art that's made by a group - although clearly I'm a mass of contradictions as I wanted MY ART to go o the flyers for the show, not the more collectively made screenprinted book designs.

I guess that's the thing about democracy; sometimes you just have to accept the majority view!

Great concert put on by OCM - although I was a bit miffed that they wouldn't let me in to see Trevor Wishart in the 1st half because they were 'recording' - surely with electronic music made of samples they would take a feed off the sound desk and also several people walked out of the door during the first half.  Moan Moan bloody moan.  However, second half was very interesting, I've tried to capture the mood of the different pieces in these sketches. My favourites are the speakers and the couple listening.  I gave the drawings to the artists (and couple) and they all seemed pleased with their pics.  I liked David prior's long mutation of water sounds most I think, although Anvil & Stirrup were very friendly, and there was something cleansing about their pure tone drone tune.

This is a digitally edited version of the Anvil&Stirrup image above - I imported it into Illustrator, Auto traced it onto 2 different layers with different thresholds, then  added a brick background (as this was what was behind them in reality)

Last night I went to an amazing concert hosted at the North Wall by an Irish Mancunian called Gerry Diver.  He's gathered together recordings of famous Irish folk musicians (including the indomitable Shane MacGowan & legendary Christy Moore) talking about their experiences and philosophies of life, transposed the rhythm and cadence of their speech into musical notation and, by mixing & overdubbing these elements with fiddle & other traditional instruments (and his partner Lisa Knapp's haunting vocals), created stirring, atmospheric, evocative pieces of contemporary music .

Hot Press calls it "Irish traditional music put through a Steve Reich blender;" I myself had immediately thought of Reich's Different Trains when I first heard "Old Time Musicians" on the Speech Project website.

The music was accompanied by imaginative  & mysterious visuals created by Matt Jamie amongst others.

For a while I've been sketching artists & the feelings music creates in me whilst at gigs, and I was particularly  pleased with last nights' results.  I was using a new toy, a watercolour brush which has water in the handle, so you can paint without having to dip your brush in to water all the time.

I try to draw or sketch really quickly, or at least to finish each piece within the duration of the song / piece. I took images from the video, and the live performers/instruments, and interpretted them fluidly (literally) on the page, wherever they seem to fit best.

I ran out of water after 4 paintings, and continued with pencil sketches only...
During the gig I thought I recognised the keyboard player and when Gerry introduced the musicians and mentioned 'Gaz' I thought, "yup, I was right"!

After the concert I walked up and said hi to the performers in the gallery space / foyer. I showed Gerry my paintings and he called vocalist Lisa Knapp (his partner) over - they were both very complimentary and asked if they could put the pictures on their website. Of course I agreed and, as has become a recent habit inspired by my partner Martine Votvik, gave them the originals whilst keeping only photographic evidence for myself. I thought it neatly symmetrical that there were 7 pictures, 1 for each of the band, and one for me!

Gerry  also asked if I'd write a blog entry for him - thus the extreme length of this post :) - and when I mentioned my original intention to actually interview him for OX105 FM, he readily offered to give me a few minutes of his time after he'd done his scheduled interview.

After a little hanging around, I got set up with Gerry, who kindly agreed to record our chat on his Mac, and we talked about Steve Reich, the Irish experience, growing up in Manchester & future projects; hopefully this will be available  online soon!

I had a great chat with Lisa (about music and shampoo!), &   chatted to Gaz (all to briefly about Manchester days and current activist activities).

I haven't enjoyed a night out so much in ages, and felt thoroughly welcomed by the performers; they really made me feel that I had a talent worth exploring, and the music they created was really inspiring. I urge you to get a copy of the CD!

ps Lisa Knapp's CD "Wild & Undaunted" is really good too "An album of traditional  folk song's peppered with some original pieces.  Produced by Gerry Diver."
Posted by Dot23 at 02:56 0 comments