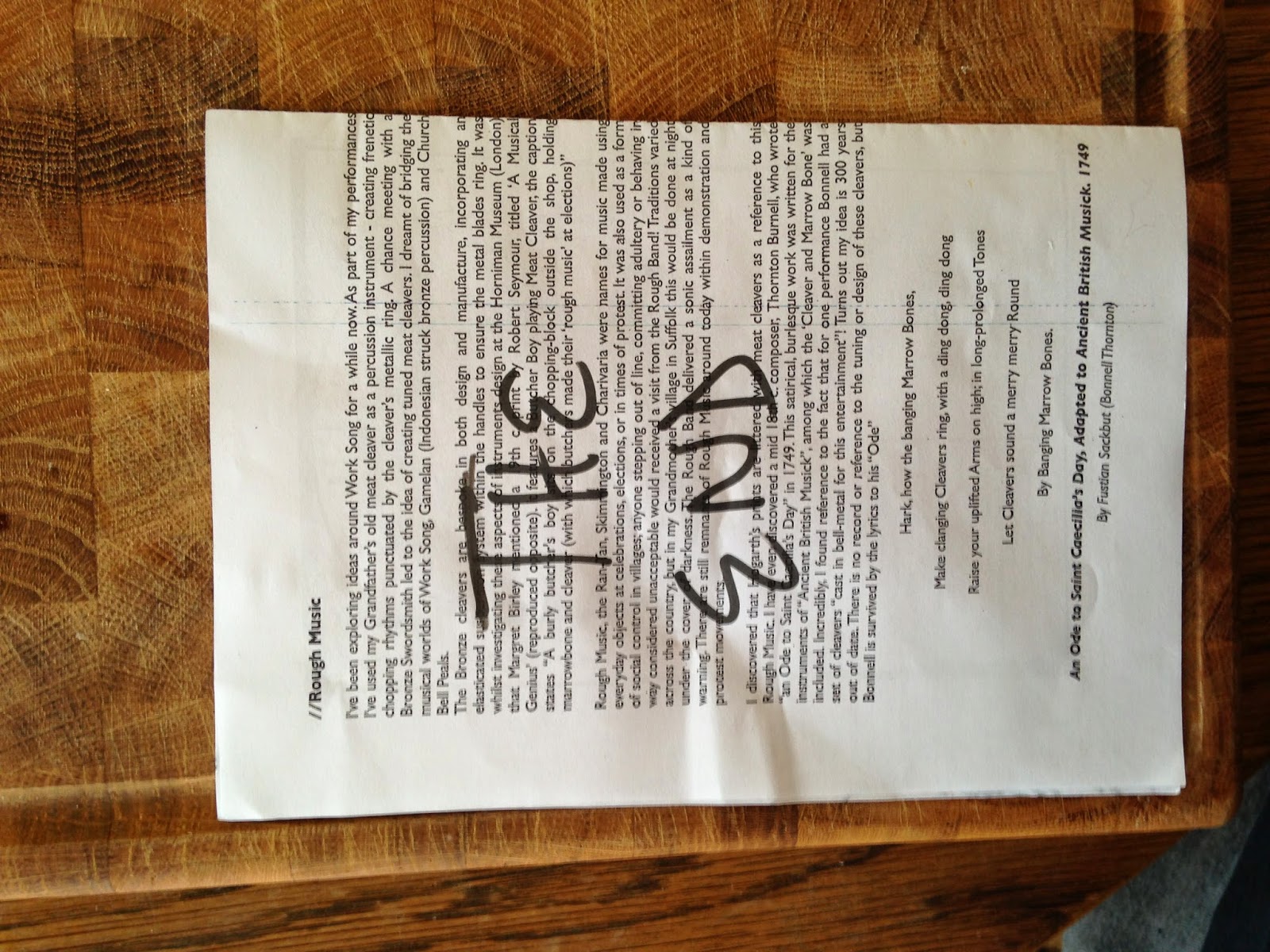 Finally made it to SupernormalFestival which was a weird mix of experimental music, avant garde art and death metal. Here are the doodles I done whilst roaming in the gloaming.

This guy, David Broughton, was probably my festival highlight musically - he incorporated folk guitar, spoken word, electronic repetition, radio randomness, mike glitches and even packing up became part of the performance. The picture on the left was inspired by a lyric (at top) which induced me to draw the portait I'd been about to attempt with my eyes closed. At right, he complained of bronchitis, got pissed off and sat in a chair drinking a Guinness whilst the loops he'd made popped and whirled uncontrollably around him. The phrase is the last thing he said before leaving the stage.

Below is a triptych starting with me holding a portrait painted in 15 minutes by quick sketch artist Brenda Zlamany who achieved internet fame last year by painting 888 Taiwanese Portaits in 4 months.  She uses a curious optical device called a Camera lucida. Centre is my 30-second sketch of her drawn in a rush as I was heading to the car to leave the festival and finally on the right is Izzy (?) from Bath (?) who facepainted me with a cool hand clutching an eye in a cube design I found on a badge. This of course allowed me to make the claim that I'd had my face painted twice in half an hour ;)
Posted by Dot23 at 16:14 0 comments *deliberate typo recognisable to readers of Private Eye as "the Guardian" once famous for poor spellchecking
Posted by Dot23 at 17:24 0 comments

Archive: At the Psychdelia Show

I got thrown out of the exhibition on psychedelia TWICE! 1st time i put on rollerskates & REFUSED 2 remove them when i was told they were a safety hazard!  they then proceeded to initiate a high speed chase round the gallery, even though i clearly was never gonna get caught by secuity on foot!  I kept saying, "i'm only a danger now cos your chasing me!!!"  best bit was when i zoomed round the bottom of a spiral staircase as 2 gaurds closed in on me from both sides!  Then they put an announcement over ther tannoy "the gallery is now closing - leave immediately", so I voluntarily left & took the skates off.  chatted up the receptionists & they said it was cool to go back in, so i went n had a fag...

met 2 guys outsuide & we made a j n smoked it.... guard came out but did nothing, then the CURATOR came out, ginger, mid 40s woman, and said " we were going to let u back in but now that you've BEEN SMOKING WHAT YOU@VE BEEN SMOKING, you'll understand if we don't let you back in!"

I said "No, i don't understand how you can't even bring yourself to use thr word MARAJUANA when you're curating an exhibition about psychadelic drugs, and 50 percent of the people in there are probably high!".  she attempted to stop me going back in but i gave her and the doormen the slip and ran back inside (minus rucksack n skates :( ).   I hid in a little curtained off room containing a weird pulsing light that was meant to induce trips, listening to all the guards running around looking for me, muttering darkly into their walkietalkies, until a security guard spotted me and said, "can i ask u a question?"

\i came out of hiding & said "sure, what's the question? wanna know what my favourite movie is?"

I said "why, is it personal?  are you going to ask about my sexual habits?  can't u ask in front of the people here?" gesticulating at the crowd that'd gathered
#
This embarassed & confused him him so much he let me walk off, but i was soon surrounded by 5 guys in uniform, who sort of corralled me in this corner, until i walked into them calmly saying, "all i want to do is look round the exhibition without being harrassed, what's your problem?"

they wouldn 't let me pass at first, and then they tried to grab hold of me, but i managed to slip through the cordon and ran off, shouting over my shoulder, "boys, i understand your need to be close to me, but i can't help with your sexual frustration, not in front of all these people!"

finally the head of security, who'd been trying to manhandle me, realised I wasn't a crackhead or nutjob, and started to chat, I said I just wanted to have a look at a final few things and then \I'd leave, especially an installation of some 60s film footage - he said he'd have to accompany me, & i agreed.
|We went to look at the film and after a few minutes of random images of dogs, bicycles & paperclips we turned to each other & he said, "this is really boring", I said "yeah, shall we blow this joint?" & we walked out arm in arm!
Posted by Dot23 at 10:52 2 comments